Update 1/20/2008.....OK....so I saw Jim Cramer of Mad Money on CNBC last night on an interview program and he reiterated his belief that now was a great time to buy real estate. He stated "in some cases, it may be the best time in 10-15 years to buy." I'm withholding opinion until I see him say it repeatedly but he may actually believe the market has turned. Since this is by and large a MEDIA driven housing problem, having the media turn and be positive may be a sign the up side is coming....

1/18/2008....The Governor's tax relief bill was passed out of the powerful Indiana House Ways & Means committee on 1/17 by a unamimous 24-0 vote. It was considered without amendments and will go on to the Indiana House of Representatives for a vote. Essentially it would cap Indiana residential property tax payments at 1% of the value and place a higher burden on business.


UPDATE 1/17/2008.......Jim Cramer, host of CNBC'S Mad Money actually said on the Today Show that right now 'people should buy a house.' Here's a guy who's been bashing real estate for months and this morning he said two years from now we'd all regret not having bought a home during this time. Somewhere there's a skiff of ice on the lake in hell.

This is the The Real Estate Minute for the week of January 14th, 2008 including good news on interest rates, the secret to selling a home in a challenging market and real estate becomes more important than sex (say what?)...

Next week the video update will include the most bizzarre moment so far from the Indiana legislature regarding the property tax debate. Warning....it involves discussion of traveling to Pluto. I'll have it online here on Monday the 21st.

We also said goodbye to an old friend this week as the Colts played their final game at the RCA Dome in Indianapolis. My thanks to the great people at First Indiana for their hospitality during the game. I had a great view of Archie Manning, Ashley Manning and Kirk Herbstreit of ESPN who were in the suite immediatly next to ours. I also had a great view of the game, which wasn't so entertaining. From the first Colts game I saw at the dome in 1984 against the Jets to the final one against the Chargers, there's been some great history. Let's hope Lucas Oil brings us as much fun and good times as well. Indiana has invested most of a BILLION dollars in a new retractable roof stadium and convention center that should help our local economy for years to come. 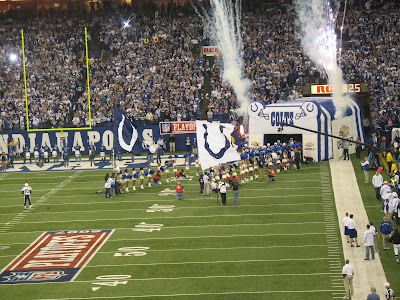 Conversation overheard as I pursued my early morning caffeine:
CLERK: How are you today maam?
Female Customer: Well I'm on the right side of the grass so that's good I suppose."
CLERK: ...but if were on the wrong side of the grass, at least we'd be able to sleep longer."

I guess we could have labled this "where reality and optimism collide."