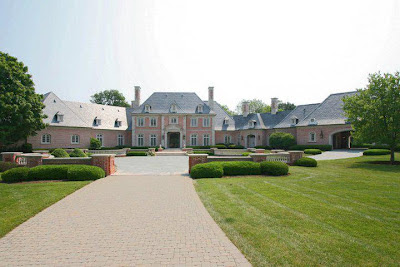 In October of 2010, my partner, Dick Richwine and I closed a real estate sale on the highest profile property in the state of Indiana, 1143 West 116th in Carmel.  The new owners, Forest and Charlotte Lucas are incredibly nice people and more than able suitors for being in charge of this amazing estate.  They were a part of this process for more than two years before finally owning it (more on that later).  We could not have been more privileged to help hand this property over to them.

The sale of this home was caused by a disagreement between Conseco now CNO and its former owners.  For purposes of this blog I won't be commenting about this disagreement.  We weren't hired to do that. We were hired to sell the home and that's exactly what we did.   For over five years, four months and some odd days, we marketed and sold a property that was in the midst of legal action totaling tens of millions of dollars.  We worked for Conseco in this disagreement.  To the home's former owners, we were the bad guys.  We were told every move we made was being scrutinized by the other side's attorneys. Let me assure you there were a LOT of attorneys. So we double checked and documented everything we did and oh, by the way at times we didn't sleep very much knowing what was riding on this sale.  For the former owners, for the company, for our careers, there was a great deal at stake.

Which brings me to the reason you're here. The stories. This journey was full of 'moments' that you won't believe until you read them.  I should know. I had a front row seat to all of it. From the political and legal tussle between the parties to the parallel lawsuits it spawned  and the fraudulent buyers who appeared. There were enormous philanthropic events, $1,000,000 lost earnest money deposits, a female wrestler from the WWE, Oprah Winfrey, Jim Morrison, Prince Howard Rockefeller Hughes lll, the near murder of Teddy Roosevelt's nephew and on and on and on. Over the coming weeks I'm going to share them with you, every day or so, one at a time. Thanks for joining us on this walk down memory lane.  It's been two years and only now am I able to look back on it and laugh a bit. Up until now, it's simply been too exhausting to reconsider.  The most constant question I get asked is....'would you do it again?'  To this day I have no idea.
Greg Cooper, Hilbert Estate, Carmel Indiana, top selling carmel indiana realtors, real estate agent, brokers, Forest Lucas.  east carmel indiana homes for sale