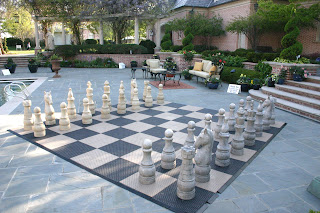 The Decorator's Show House for 2006 was looking for a new home.  We had the most desirable spot in the Indianapolis area. It seemed like a match made in heaven but the politics had just begun.  While we were trying to convince our boss at Conseco to use this property to house the DSH and draw thousands in to see it, there was a meddler who was trying to blow it all up. There was a reason. This meddler just happened to have a very large home that he would make available for the DSH and St. Margaret's Guild and oh by the way this home just happened to have a large tract of land around it that was about to be turned into a neighborhood development.  In other words, he was trying to lure the event to his location to promote his property.  He was telling whoppers to various members of the Guild to try and do that.  Liars have a way of getting caught up in the ruse and he did. Fortunately for us we had the trust issue and a better location on our side. The Guild was now on board to meet with our boss at Conseco, Mr. Big.  There would be a final discussion coming on whether the DSH would be at 1143 W. 116th Street.
The meeting between Mr. Big and St. Margaret's Guild was another surreal moment in this whole 5 plus year process.  We sat in a large board room with four members of the Guild, Mr. Big, my partner Dick Richwine and myself.  Understand that these four ladies from the Guild were people dedicated by this cause to helping people in need in the community. It would be fair to say they were prim and proper. It would also be fair to say that Mr. Big was not. He was a high level executive who was used to doing things his way. He was brash and not especially worried about hurting feelings. This had the potential to be a mess.
So the discussion began with Mr. Big peppering the ladies with questions about logistics (how are we going to get thousands of people in and out of there) and safety and managing the site and security, etc., etc. He went at them like he did us when we were interviewed to be the brokers for this sale. There was a lot of tension in that room.  We knew as the brokers that this event could lead to massive exposure and a sale of this property. The Guild needed a location to save their signature event. Their charity was counting on the thousands of dollars from that event to serve needy people. As the brokers we needed it. As a philanthropic group, they needed it.
As the discussion wore on, Mr. Big's phone rang.  It was the former owner of the property.  We could hear his voice but could not tell exactly what he was saying. He was NOT happy. The conversation raged mostly from the other end of the phone. Mr. Big held his cell nonchalantly and gazed out of the window for almost 10 minutes during the conversation. Understand that there were high levels of extended negotiation going on between Mr. Big and this former owner relative to the legal action of Conseco. We didn't know it at the time but his consideration of using the mansion for a Decorator's Show House had little to do with charity. It had to do with tweaking the other side, just like the radio broadcast we described in an earlier post. As the conversation ended. Mr. Big was still staring out the window when he uttered in his Boston brogue 'the farmahhhhh ownuhhhh of the residence is against us holding the Show House at the mansion and that's exactly why we're going to do it.'
Dead silence.  Everyone looked at me and then at Mr. Big. Did that mean?  Yes. It certainly did. The DSH was coming to the mansion. It would be the biggest charitable event to hit the city, quite likely ever. We had a 20 million dollar mansion to sell and would be right in the middle of it.
greg cooper, east carmel indiana homes for sale neighborhoods 46033, top selling indiana realtor broker agent greg cooper
﻿
Posted by Greg Cooper at 11:26 AM