Selling The Mansion #7: Big Joe and The King 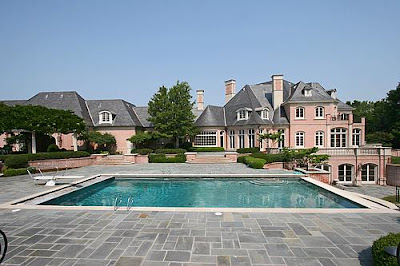 One of the things we had to do as the agents that were going to sell this estate was get it out there. Literally every day our first month was spent on how to get as many people aware of it and the fact that it was for sale as we could. Sound simple but it wasn't. Naively, we didn't fully understand why.  One would think it was just about selling the home. That was about half of it. When this property went up for sale it was in the midst of a huge legal struggle between Conseco and it's former CEO and owner of one of Indiana's highest profile properties. That's right....for the first three and a half years this home was for sale, Conseco didn't own it. They were in control of it legally, but their names were not on the deed.  So, while us getting media attention to this home was important (which wasn't that tough by the way), it was also about clout. Our clients, Conseco and our boss who represented them, Mr. Big, were using the sale of this home as a bargaining chip. He was out to prove to the former owner he was bigger, badder and incredibly intense about selling this home as a way of proving to them he was going to win the overall legal battle. We were just naive players in the scheme.

One of our first media efforts was to host Dave 'The King' Wilson and his afternoon sidekick on WIBC at the time, Big Joe Staysniak. They would broadcast from the mansion pool side from just behind the diving board in the shade of the Wisteria that sat behind the pool. Now Dave was not a fan of the former owners and wasn't afraid to share that. Our concern was that during live radio there was the possibility that something could get said that could be so blunt that it could cause us big issues with our boss. In fact I suspect from today's vantage point that Mr. Big would have tolerated almost anything and loved every minute of it if it upset the former owners.  All we cared about was getting through it without getting fired. It was a warm August day in 2005 and the broadcast went on. Big Joe would walk the home room to room and Dave would provide the color commentary. It was like a sporting event. 'Big Joe, how's that dance floor in the rec area?'  'Disco lights but no brass pole Dave.'  Back and forth it went and we held our breath. We really didn't know where the line was on what could be said although after the fact it probably didn't matter.  Finally at the end of the show we sat with them near the pool and chatted about the home.  Dave taunted big Joe a bit about being in this incredible surrounding and not once getting in the pool.  That was all it took.  The former NFL lineman Staysniak took two huge bounces off the board and landed with one tremendous cannon ball in the middle of the pool.  While it was the lightest moment of the day, I was concerned.  With no one living in the home, the pool company wasn't there every day and in turn kept enough chemicals in it to kill a horse. Now big Joe was submerged in it.  He climbed the ladder with his skin in tact and at least seemed no worse for the wear.  The afternoon had come to a close without significant problems....and Big Joe had only faded two to three skin tones.